We have two experimental setups where we study of the effects of strong dipole-dipole interactions in systems of a few atoms: 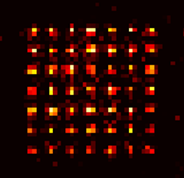